So I finally got around to going through my photos from retreat last weekend.  I didn't realize I took soo many pictures.  But there was alot of creativity going on in those three rooms.  I must say that the Country Quilter / Flourish staff, did a wonderful job, as usual, making sure that the inspiration was all around us!

So I have sorted and cropped my photos and picked out a bunch I think you will like, but if you indulge me, I will start with what I worked on over the course of the weekend.

The first was a male dancer inspired by a piece of art work I had seen years ago.  My sketch had sat in my sketchpad, waiting for 2 years.  Then while at Lancaster last month, I saw the fabric that he was waiting for....  a piece of hombre fabric....  yummmmm... 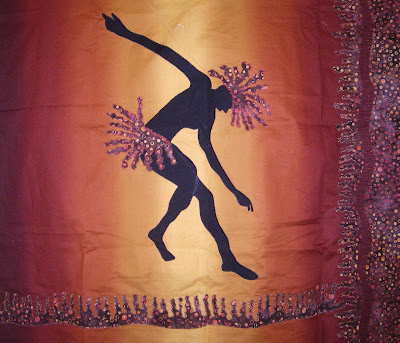 He is appliqued on with a satin stitch using Black Madeira Rayon thread.  Then using Superior's Metallic, I used a straight stitch and created a fuzzy or feathery stitch on his clothing, head dress and the accent fabric. 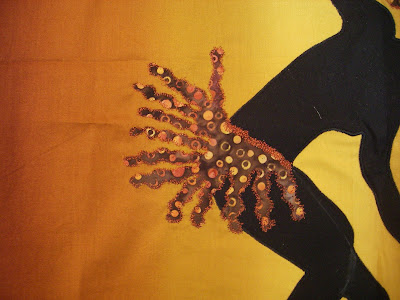 I enjoy using a little thread play to add texture to my tops.  Using the metallic thread adds to it's interest.  He isn't finished yet.  I still have to take gold metallic thread and add his arm and neck bands and them some Superior Razzle Dazzle in the bobbin and do some bobbin play on his wrists and ankles.  I will probably do some other thread play in the right hand upper corner, before I sandwhich it up, but that is all I accomplished Friday night / Saturday morning.

Saturday afternoon I took out another sketch I had captured from free clip art.  I enlarged it and using some Dupioni Silk, I made the center of this piece. 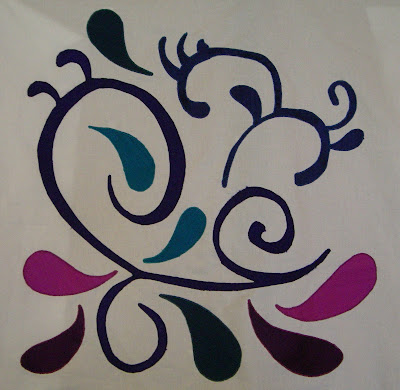 I think I am going to love this piece.  If you remember, I have had paisley images dancing around in my head for awhile.  Right now the silk applique pieces are outlined in satin stitch in matching thread (some Madiera and some Isacord).  It amazes me, but I do love the satin stitch on my old Viking Lilly...  I carry the Lilly with me on retreats, because it is light weight and easy to manage, but I must say it is my favorite machine for satin stitch.  The Bernina 830 is very heavy and too fragile to drive around, but I will use it for the bobbin/thread play and of course the quilting.  Quilting on the 830 is a dream.

OK, back to the quilts...  each element will get jewels added to make up the design which calls for small dots on the outside of most of the elements.  I am then thinking of adding ribbons of silk that will overlap onto a mostly purple border.  I haven't chosen the boarder fabric just yet, which is why I didn't get much farther on this piece :-).

On Sunday, I took out a piece I had been working over over the last two retreats.  It was my 'backup' project in case I ran out of stuff to do on previous weekends.  Well, I picked this one up and finally got the center of the quilt together. 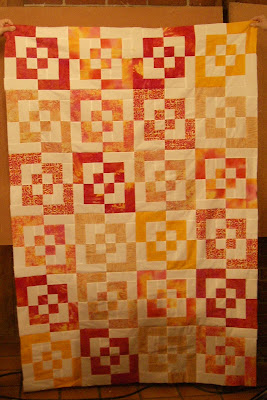 I really enjoyed working on a more traditional piece.  The colors are wayyyy off, but I will share more pictures once I get the boarders on...  hopefully before next retreat:-).  This was a give away pattern a few retreats ago, that has been hanging around with me ever since.  It is called Bento Box and was designed by Mary Gay Leahy.  Nice....

That is all I got done this time.  No finished projects.  Although, I did draft out the next round on my 3D Mariners Compass, it wasn't speaking to me enough to actually make it.  So, I put it away this weekend.  But, I did see something at the quilt show in Somers yesterday that gave me an idea.  I sketched one corner last night and I will let it soak in for a few days, while I work on my 15 mo old UFO.  Yes, that is progressing nicely.  I will grab a picture of them both and post sometime later this week.

So I have three posts to do now....  First, the remainder of the photos from the show, then the photos of the retreat from all the other quilters and then my UFO and 3D quilts.

But again tonight I am heading to bed...  so tired.  We went up to RPI today and picked up some of Robert's stuff before he comes home for the summer....

You know, I just realized I have 5 pieces going at once.  This from the girl who was never comfortable with 2 works in progress.  Now 5...  guess I better get busy!!  But first tomorrow night, Pelham Quilters Guild meeting...  oh well, guess posting and quilting will have to wait another day or two :-)
Posted by Renee at 10:49 PM