For those of you who are also my friend on Facebook, you can skip this post :-).  I just want to share my latest experiment with my friends in blog-land.

Last week, while my head was spinning on what to work on next, I decided to see if my new found friendship with the BSR on my 830, would wash away all my troubles using one of my favorite threads, Superior Rainbows, on the 830.  And since I was playing I decided to try my hand at actually working on something else I want to try one day, a whole cloth quilt.  So out came a piece of Kona White, my pencil, a compass, a protracter (no this isn't math class, but I can't draw a smooth curve let alone create multiple curves, all lined up around a star...  so I needed just a tad bit of help :-)).  I loosely drew what seemed like a pleasing outline to start with and quickly grabbed a piece of scrap wool batting and one of my many Rainbow cones.

So...  I was set.  Ready to begin....  I attached the BSR assembly, loaded my thread and off I went.  The center shapes came out okay...  I missed my marks a bit, so things don't line up all the way, but the stitching was smooth.  No skipped stitches, no spit up on the back and NO thread breakage!  I was beginning to think that I got the hang of this thing.  I was even able to do the next round, quilting using my 'leaf on leaf' motif, that I created for my last piece.  Again...  no issues....  I was on a roll!!!

I came back the next night and decided that my shape was to be enclosed in a circle and I would use a close stipple to make my archs pop from the wool batting.  Well wrong I was!  Snags, skipped stitches, spit up...  yes it all came back.  Then I remembered, oh wait, I was supposed to lower my stitch length.  That is what I learned from the Bernina BSR Webinar about a month or so ago...  so I lowered my stitch length to 1.0 and away I went.  Smooth as a baby's bottom.  Half-way through, I decided to call it a night.

I came back the next day, used the same settings as the night before and WHAM, same 'ole, same 'ole.  Well no skipped stitches or thread breakage, but I did have tons of spit up on the back.  I could even feel it happening...  I don't know what changed in the 24 hours I was away from the machine.  My tension and stitch length was the same... I was smart enough to save the settings as a favorite.  So what happened?

Well I don't know.  But later that night, I remembered that the latest software update for the 830 includes a fix for tension issues on a wide variety of threads.  Maybe, just maybe, it will help with my Rainbows issues.  I have tons of this thread, love the color changes, love the sheen, love the look in my quilts, but HATE the way it behaves when mixed with the 830...  BSR or un-aided free motion quilting.

Since I am in Florida right now on business, I will have to wait to see if the update actually fixed my problems.  But I thought I would at least share the results of my play time...

So here it is: 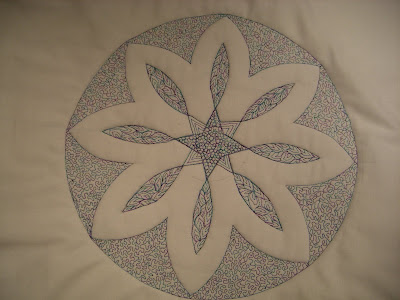 Once I get home I will once again try to fix the issue with the Rainbow thread and then try this on one of my Radiance silk/cotton blends, with silk thread.  Yummm, isn't playtime, just wonderful!
Posted by Renee at 12:26 AM 4 comments:

Still no name for my UFO, but it will come to me.

While in Atlanta last week, before heading to the airport I made a stop by Intown Quilters.  This is one shop whose website does not do it justice.  Actually, I really debated if I was going to go or not from looking at their site.  Boy, was I presently surprised!  This place was huge, had quite a bit of diversity in fabric, patterns and quite a wide range of tools/notions.  They had an entire section devoted to children"s fabric, quilts and clothes.  Another section of Kaffe Fasset fabrics, another section for orientals, another for batiks, another for african fabrics, etc...   The shop was bright and cheery.  Of course, I did my usual damage...  some black and whites, some african and some thread.  A good end to a good business day!

On Saturday, I had a great time with Ashley.  She drove down and we spent the day quilting and chatting.  What a great day...  good friends and quilting.  Life just doesn't get any better!
Posted by Renee at 9:41 PM No comments: 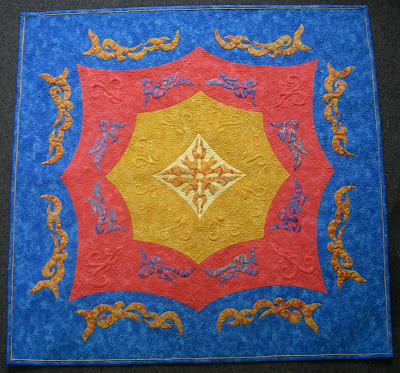 Yes, I am pretty proud of myself.  I love the colors, the applique, the trapunto, the quilting....  yeah, just about everything about this piece, I like.

It all started at retreat in Oct 2008, when I picked out the fabrics and decided to do a 'medallion' quilt.  While I layed out the background, I had a hard time deciding on what the appliques would look like.  So home it came and over the next 2 months, my DH and I played with different applique shapes.  In the end, I modified one of Ricky Tim's applique shapes from his Rhapsody patterns and came up with two different shapes that I liked and fit the areas just right.  The center applique is totally original and was done via the old paper doll method....  folding a piece of paper in quarters, drawing a design on one of the quadrants and then un-folding it to see what you get.  I played with 3 or 4, until I came up with this. 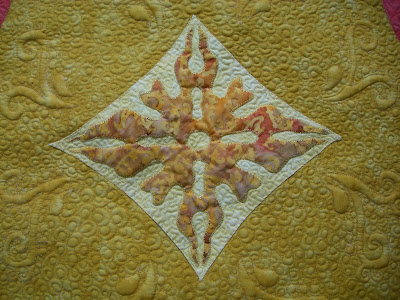 But it became a UFO, because once I got the appliques on, I couldn't decide how to quilt it.  Then all of a sudden trapunto came to my mind and I pulled it back out.  I figured trapunto would be a great way to fill in some of the wide open spaces.

With the trapunto done, I knew that I needed fairly close quilting to make the trapunto stand out.  So I played with a few different designs and agreed this piece needed different designs in the different sections.  So you can see I used basic meandering in the center.  Then added my circle in a circle pattern in the next section.  In the salmon section around the applique I used a leave on leave pattern.  I think I like this design because it really adapted itself to going around the shapes and around the gold medallion. 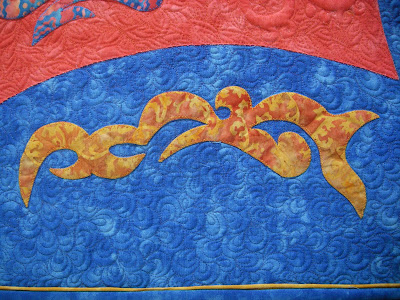 Then I ended with a pattern I learned from Mary Anne Ciccotelli, even though I don't know what it is called.  Nice thing about this design, is it can be used as a fairly tight quilting motif, or a big loose motif on a bed or lap quilt.  Very versatile it is :-).

Anyway, you see next I decided to add piping, versus just facing this wall hanging like I have been doing so much of lately.  I just thought it was more suitable to the piece.  A more traditional style deserved a more traditional ending.

This piece is quilted totally with Aurifil Cotton 50 weight thread.  I am liking Aurifil more and more lately.  It did such a wonderful job on this piece!

Now the problem is, it hasn't spoken to me yet, so I don't have a name for it yet.  Will have to let it hang in the studio for awhile, until it tells me what it wants to be called.  That is, unless you have a good suggestion?

I am lucky enough to live close enough to Jane Davila, to take workshops in her studio (yeah me!).  So in March I took her Surface Design Workshop which teaches techniques to enhance your quilt top.....  I know this post is a little late, but better later than never is my motto :-).

Jane used some of her pieces to talk to us about various techniques... 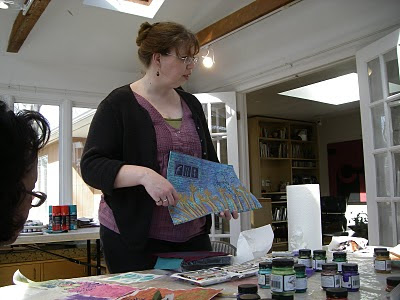 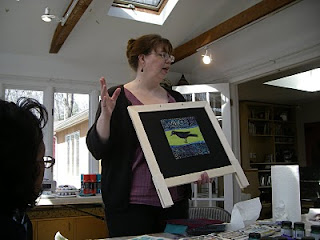 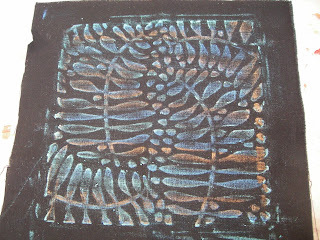 Then we had the opportunity to play.  There were 4 of us and we had a ball trying out some of the basic techniques.

We played with Shiva Stiks.

This one was made by Donna Chambers....

The next one was done by me...

We used scratch pads and then one or more Shiva Stiks of different colors. 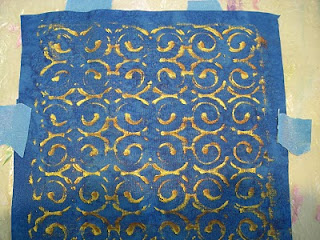 We also played with shaving cream to create our own marble fabric.  That's right shaving cream.  It is a technique that Jane created that allows the inks to be suspended on a medium, in this case, shaving cream and then transferred onto fabric.  We used plain white fabric, but the same technique could be done with any type of fabric.  Unfortunately, I forgot to take out my camera when we were creating our marble fabric.

We also played with water color pencils.  Real cool, just like drawing when you were a kid, but now you can do more than just hang it on the refrigerator :-). 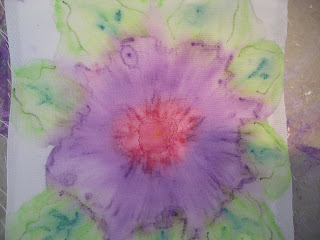 Once you make your line drawing, all you have to do is go over it with a wet paint brush and before you know it, you have a water color painting on fabric.  Add some batting and backing and some free motion quilting and you have a great little quilted piece.  This is a great way to incorporate your child's artwork amongst your own to make a quilt together!

Donna Chambers kept adding to her basic water color design...she added depth using Ink Pens for highlighting and then gold paint on the mesh from Wonder Under to add texture.   Once painted the 'glue' mesh from Womder Under can be ironed onto your top, creating great texture to your piece, especially if you use some of the wonderful iridescent paints we got to play with. 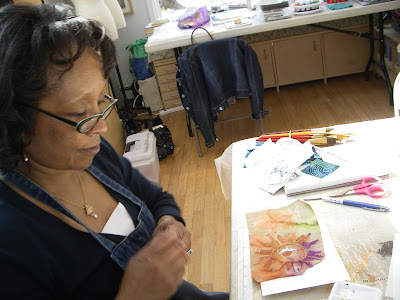 The day flew by so fast, we ran way over the allotted time.  Jane gave us a tour of her husband, Carlos's studio space and of course we got to purchase some cool stuff :-).  Now to make sure I actually use it...  wait I have used the Fusible Thread and I already have plans for the Fusible Powder....  both provide a great way to add accents to your quilt tops.

If you are ever in the same place where Jane is teaching, make sure to sign-up for one of her classes.  I can guarantee you won't be disappointed!
Posted by Renee at 9:28 PM 1 comment: