"Clowning" around during Irene

My prayers and good wishes go out to those who are still without power or have been flooded out of their homes here on the east coast.  I know these are trying times for many.  We were very fortunate that Hurricane Irene just left us with some twigs on the ground after it came through on Sunday with it's strong winds and rain.

The rain started here on Saturday and for the first time in a long time, I was able to sit down and sew for more than an hour at a time.  Since I had finished Ashante Rhythms that you saw in my last post and it is all ready to be shipped to the Pennsylvania National Quilt Extravaganza, I was ready to begin my next project.  With 3 babies coming into the family over the next 6 months, I knew that I was not going to get a chance to work on any of my 3 WIP's.  No they would have to wait for awhile.

Instead, I started on a baby quilt for a little boy who joined the family 2 weeks ago.  I knew it was going to be a clown quilt.  I had even picked up some coloring books with clowns in them to get a feel for the applique I was going to have to make.  So early Saturday afternoon I sat down with my sketchpad, pencils, wonder-under and some fabrics I brought in Chile this spring and by later that evening. I had my clown all fused down.  (Thank God for crockpots, because I was able to put some short ribs of beef in about noon, and didn't have to worry about stopping to cook hubby dinner :-) ).  I spent Sunday afternoon and evening appliqueing him down with a tight satin stitch.  I figured that it will be washed many times over, so I better stitch it down good.  Tonight I went in and did another round of satin stitch on the ribbon collar to give it some dimension and then added highlights to the eyes and nose with some thread play.

He will be in the center of the quilt top and he will be juggling balls, spelling out the baby's name.  I drafted the balls this evening as well, so I will spend time the rest of this week creating those appliques and then adding sides and top to the clown rectangle, so the balls can be appliqued in a semi circle over his head.  I expect the finished top to be about 50" x 40".

Is he finished yet?

Have you ever had a slow talking quilt?  Well this dancer is exactly that.  Don't think he will sweet talk anyone anytime soon :-)....

I have had my latest dancer in the works since late winter.  Yes, I seem to be quite fixated on dancers these days, but I guess like my circle quilts of a few years ago, they are my muse at the moment.  While the center was easy applique from my sketch pad, we went through early spring together deciding on how to work the sashing and boarders.  I threw away a bit of fabric deciding on the sashing color...  blue or yellow, but finally he said blue.  The boarder accent fabric had been my inspiration for the color scheme, but oh my there sat full circles printed too far away from each other for my use.  So I had to improvise by fussy cutting the circles out of their black background fabric, cut them in half and applique them on a different Kona black fabric at a distance that worked for him....  phew! 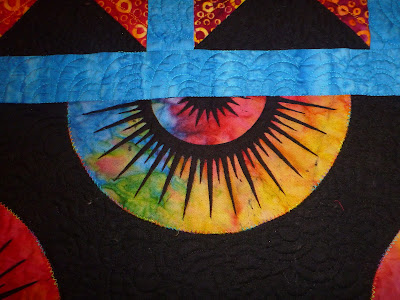 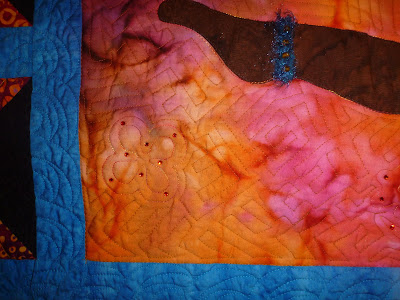 Then it was how to quilt it in late spring.  The center was easy.  I wanted something that had a primitive look to it and I had to be able to hide some Adrinka symbols in the background.  A couple of hours and the center was done.  But, once again, the sashing became the stumbling block.  So once again, I had to put him down until he spoke to me. 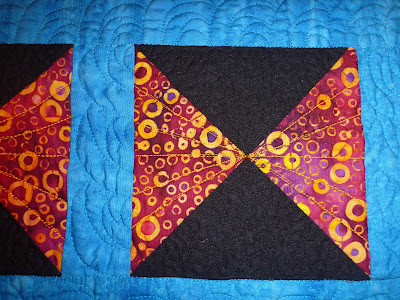 By early summer he was finally quilted, but he needed more.  So I decided to pull out some embellishments I had brought for my last dancer and never used.  He has a silk ribbon skirt, as well as arm and ankle bands made of yarn and beads and a beaded neck piece. Then I added crystals here and there, both in the background to accent the Adrinka symbols, but also in the center of each of the setting squares.  I figured, hey why not...  it adds a sort of pizazz!  :-)


He is quilted entirely in Superior Threads....  Rainbows for the Adrinka symbols, and then either SewFine or Masterpiece for everything else. 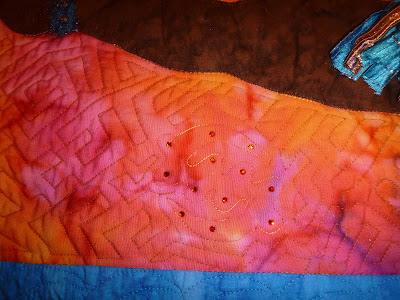 Tonight I finally got around to squaring it up, so I can attach the binding this weekend.  It would be nice to get him finished in time to submit him into the Pennsylvania Quilt Fest, but entries have to postmarked by next Friday, and of course....  I am not sure if he is finished yet....  I think he wants a headdress....  I think he's telling me that no respectable Asante warrior would go into battle without one. 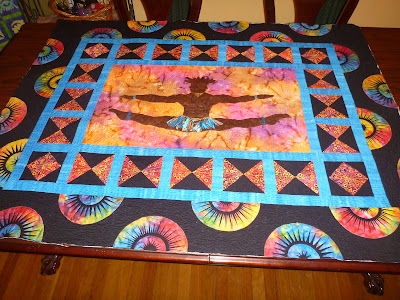