Well, after over 11 hours of frogging and then redoing the trapunto, I was finally able to get this piece done!

Yes, I took out all the stitching around the trapunto and redid it.  I didn't like the heavier weight variegated cotton thread I had initially used.  I had planned to do all the quilting with that same thread, but didn't quite like it once the trapunto was done.  So I decided to use it just for the trapunto and ended up using a finer Sulky poly thread to quilt with.  But once all the quilting was done, the trapunto just jumped out at you and not in a good way.  So as emotionally invested as I was in this piece, the piece that kept telling me how much like my Mother I was, I knew what I had to do.  Rip it out. 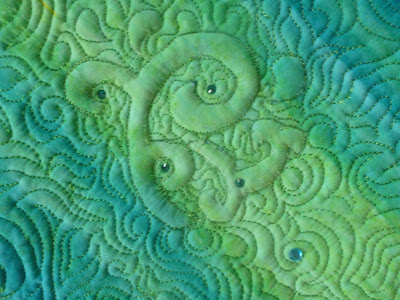 And now, with the hotfix crystals added, I know it was the right thing.  Otherwise, they would have been competing with the heavier cotton thread. 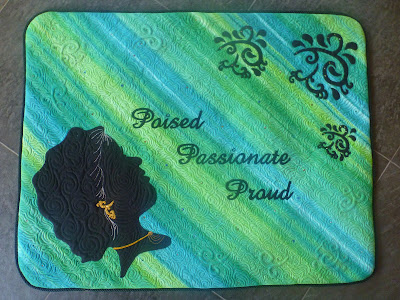 I love the texture in this piece.  I used the wool felt under the batting in this piece, just like I did with "In the Spotlight".  It gives the quilting such a deep effect.

Since I didn't add a boarder, I used black cording to pipe the wall hanging.  This brought the black from the applique out to the edges of the piece, framing it nicely. 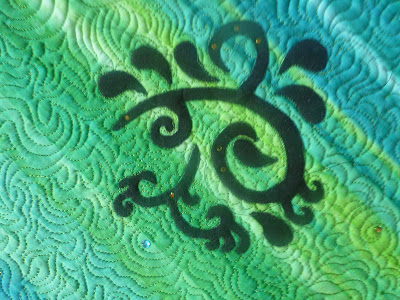 This isn't a  good picture, but as always, I love the paisley.  This is the second piece that I have used this applique design on.  I love all the swirls and points mixed.  If it was a better picture, you would be able to see what a nice touch the crystals add :-). 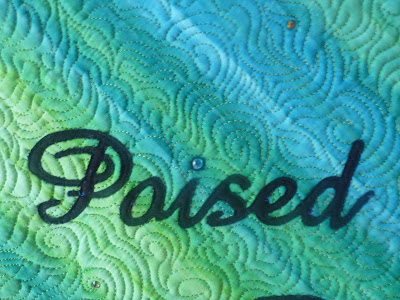 
So while it seemed to take forever to make, I am quite happy.  I think my Mother would like it as well.