Vote for Paducah, KY as your Favorite Destination!

Since 2000, the National Trust for Historic Preservation’s Dozen Distinctive Destination program has recognized cities and towns that offer an authentic visitor experience by combining dynamic downtowns, cultural diversity, attractive architecture, cultural landscapes and a strong commitment to historic preservation, sustainability and revitalization. In each community, residents have joined together and taken action to protect their town’s character. Browse their site to learn more about the 2011 Dozen Distinctive Destinations and cast your vote for your favorite destination through March 15th.  When you vote, you will also be entered for a chance to win a 2 night stay at a historic hotel.

P.S.  Thanks to Libby Lehman for sharing this news :-)

I can't believe it.  I am working on my part of the Pelham Quilters Round Robin and I have made great progess.  The applique is all fused on and half of it has a zig zag stitch securing it.  Woo Hoo !!   But....  as if I was getting dressed for a fancy party and opened my closet, only to discover I have nothing to wear.....  I don't have the right shade of deep pink.  How is it that possible with over 100 spools of thread??

My husband just shook his head and said, 'Oh well guess you will be heading to the quilt shop tomorrow'.  My reply, 'unfortunately yes' :-)

Hi, just a quick post to see if anyone has paid to have their quilts professionally photographed?  If so, can you share with me what they charged, how they charged, was there a minimum number of quilts, or a volume discount?  Was it a pleasant experience, would you use the photographer again? Can you provide me with the name of the photographer or a website?

Any tips you can share about having quilts professionally photographed is appreciated.  I am trying to help a photographer who is looking into offering a service for quilters.

It's Round Robin time for Pelham Quilters

If you have been following my blog for awhile, you will know that Pelham Quilters in Pelham, NY have hosted a Round Robin for the last two years.  I started this idea, as a way to stretch members creativity and give folks an opportunity to work on pieces they didn't start, with colors and techniques they might not ordinarily work with.  I think Round Robins are a great way to begin working without a pattern or any preconceived notion of what has to happen next on a quilt top.  This year we have three tops in circulation.  I am working on the second round of one of those tops. 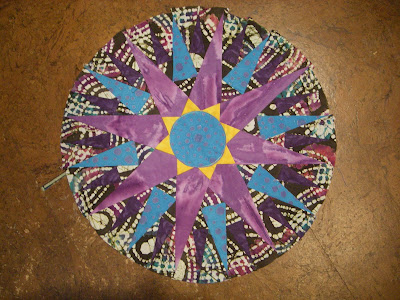 This is what I received just over a month ago.  It is paper pieced with some very interesting fabrics.  I love the batik in the background.  It is made up of white, chocolate brown, teal, pink and even a hint of green.  It took me almost 3 weeks to decide what I wanted to do with it.  I love working in circles, but didn't think I wanted to keep the initial shape.  Too predictable.  I love points, so I knew that I wanted to have points in my round.  I am also finding that I love having brown as a background, so I knew I was going to use the chocolate brown as a background for adding to the great colors of this piece.

Well here we are with two weeks left before I have to bring the top back to guild meeting and today I finally moved my idea from paper and strips of fabric and I am in the middle of creating.

I am off to my studio to start putting it all together.  Check back next week to see if my ideas actually worked out. :-)

So I mailed off two of my babies today.  In The Spotlight and A Blaze of Glory (yes finally named) were both juried into the Mid-Atlantic Quilt Festival in Hampton, Va.  This is a first juried show for me.  In the past, I only entered local guild shows.  Yes, I have won a couple of ribbons, but that is not the same.  To be accepted into a show with both national and internationally known quilters.  I am so excited.....  but also nervous.

Just think, I just sent my first two babies out into the world, to a show I have never even attended.  I have no idea what types of quilts are usually shown.  Plus they are walking in all alone....  without me or anyone I know there.  I sure hope someone reads this and goes to the show and tells me how they look :-).

Oh yes, I forgot, I never got around to posting pics of In The Spotlight totally finished. 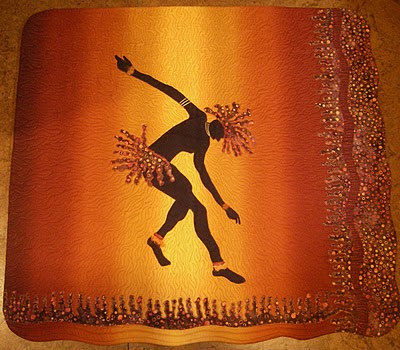 The center dancer was in my sketch pad for over two years, waiting for me to decide how to use it.  Then a few years ago at the NJ Quilt Fest, I saw this fabric and immediately knew that he had found a home. 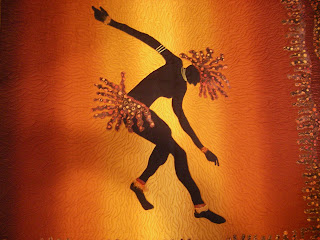 I appliqued him on using black thread, then added his sarong and head piece.  His wrist and ankles have been embellished with both yarn and ribbons and his wrist also have beads. 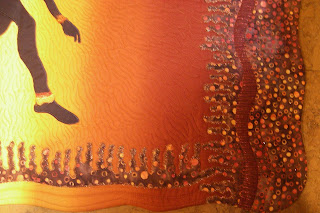 Once he was on, I added a side and bottom boarder that is outlined with Superior Metallic thread.  Using a free motion straight stitch, I added a zigzag edging to the wiggly boarder and connected the two side boards with another shade of Superior Metallics with horizontal thread play.  I couldn't believe it took a couple of hours to do all of the metallic work!

Once together I used Superior Sew Fine and free motion quilted a 'flame' sttich radiating out from the center.  I absolutely love the effect.

This is the first wallhanging that I have completed using a wool blend felt behind the cotton batting.  I love the way it hangs.  Thanks Juanita! :-)

Well now on to the next project...  the Pelham Quilters Round Robin.  I have the second round, which is due March 7th.  I will post pics of this piece in the next week or so.